In October this year, Rose shared a part of her journey during this pandemic in ‘The Listener NZ’. She was featured under the ‘Diary’ section. (see related post) She also told us that she was cooking the next one. Great news, it’s here! Her new diary post was featured in the latest ‘The Listener NZ‘ for December 2020. You can buy it here, or here, or even here. 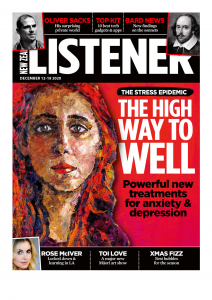 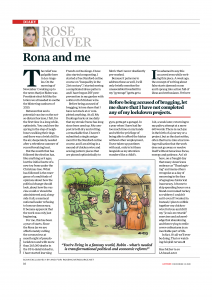 ROSE MclVER DIARY: Rona and me

The relief was palpable here in Los Angeles. On the morning of November 7, waking up to the news that Joe Biden was President-elect felt like the lotion we all needed to soothe the blistering sunburn of 2020.

Between that and a potential vaccine on the not-so-distant horizon, I felt, for the first time in a long while, optimistic. You could see the spring in the step of neighbours walking their dogs and there was a brisk chill in the air, desperately needed after a relentless summer of record-breaking heat.

But the month that has followed the election has, like anything as it ages, lost the initial lustre of a new toy from under the Christmas tree. What has followed is the emergence of a multitude of opinions about how the political change should look, about how the vaccine could or should be administered and, along-side it all, a maniacal national leader refusing to honour democracy. It became apparent that the work was only just beginning.

For me, this has been a year of starts. Since the Rona (as we are affectionately calling the coronavirus at month eight of pseudo-lockdown and with more than 265,000 deaths in the US to date) kicked in, I have started learning French on DuoLingo. I have also started composting. I started a free Stanford online course on “Inequality in the 21st century”. I started sewing a complicated dress pattern and I have begun DIY pest-prevention in my garden with a 40m roll of chicken wire.

Before being accused of bragging, let me share that I have not stuck at or completed anything. At all. My Duolingo barks at me daily that my streak freeze has long since been used up. My compost is both dry and rotting, a remarkable feat. I haven’t submitted a single assignment for the Stanford online course, and I am sitting in a mound of chicken wire and sewing pattern pieces that are pinned optimistically to fabric that I never obediently pre-washed.

Because it pains me to address these as well, I will only briefly mention the unassembled treadmill in my “gymrage” (gotta get a gym, gotta get a garage). In a year when I have had far too much time on my hands and with the privilege of being able to afford the hiatus without other employment, I have taken up pastimes with zeal, only to let them languish as my attention wanders like a child’s.

I’m ashamed to say this occurred even while writing this piece. A week ago, the concept of writing about false starts dawned on me and I sprang into action full of ideas and enthusiasm. Yet here I sit, a week later, returning to my paltry attempt at a mere 600 words. There is such joy in the birth of a journey or a project, but as the dust settles, often that turns into a harrowing realisation that the work does not go away or resolve itself without tenacious focus, energy and patience. As I sit here, on a fraught day that many Americans embrace as “Thanksgiving” and many others recognise as a day of mourning in the face of egregious historical inaccuracy, I choose to skip spending hours on a bland overcooked turkey so rubbery I couldn’t eat it even if I wanted to. Instead, I plan to cobble together my chicken-wire fortress and drill my “je suis en retarde” exercises and acknowledge that abandoning and then trying to rediscover enthusiasm is an inevitable part of life.

In fact, it’s all we’ll ever be doing. That or watch-ing Seinfeld reruns.

Rose McIver is an LA-based actor.

Transcribed by Stéphanie (rosemciversource.net/mciver-rose.org) from the scan of ‘The Listener‘ magazine (New Zealand) of December 2020. 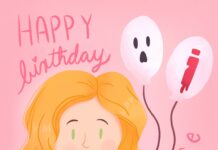 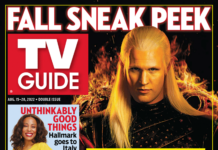 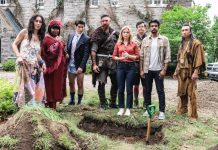