Exclusive: Behind the Scenes of the Superhero-Themed ‘Cape Town’ (Episode 2.09)

Source: tvinsider.com | When Liv (Rose McIver) ate the brain of the Fog, a murdered vigilante crime fighter, in the Season 2 episode “Cape Town,” she took on his larger-than-life personality—and adopted a costume of her own.

Though Liv regularly solves crimes and saves the day, the hour marked the first time her own form of superheroism was recognized in the more traditional sense. Series co-creator (and episode scribe) Diane Ruggiero-Wright, costume designer Michelle Hunter (her original sketches of the costumes are included below) and McIver look back at the making of the hour. 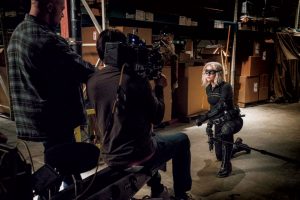 Diane Ruggiero-Wright: Its one of the brains I wanted to do from the beginning, but knew we couldn’t do early on. I’m a big superhero fan…I was wondering if there was a way to see the hero of our show in a more familiar, heroic role. It was kind of a wish fulfillment part, I have to admit: I wish I could be that vigilante, in a unitard, fighting crime on my own. Much like every fantasy I have in life, I get to write it down and have Rose McIver act it out.

Rose McIver: It was wonderful. I think of Liv as a bit of a superhero, anyway, in the way that she’s able to use her special abilities to help the everyman. It was fun to be self-aware in an episode where she plays a real-life vigilante. There are those people out there who put on those capes and help old women fight off muggers. I thought it was a really funny opportunity to make a comment on what I think Liv actually is, anyway.

Michelle Hunter: Luckily with Diane scripts, or with the ones that have been like that, she does give you a lot of information; she’s definitely got an idea, how she sees it. So start right away, to kind of put stuff together and have discussions, and you do try to get going as quickly as you can.

It’s a lot of being organized. But I find with those scripts, when somebody does have a vision of how they want it to be,that makes it a lot easier then, so you can kind of go, “Well, this is what I’m thinking.” And she’s like, “Okay, yes, exactly that,” or “Okay, now, I was thinking a bit more this.” There is kind of a vision in place. So that helps, because at least you can move forward.

Ruggiero-Wright: I think the most fun I’ve had on iZombie thus far was naming those superheroes: getting to think of the superheroes names and what they would be and what they would look like was just such great fun. I had specific things I wanted for certain characters, and some I had a general idea. I sent a lot of pictures to Michelle.

Ruggiero-Wright: I watched that documentary on HBO called Superheroes. It’s about these people who legitimately go out as these vigilantes. They know they don’t have superpowers, but they think of themselves as crime fighters. I wanted her to have that brazen ego, but also that hope and conviction that really believes everything she’s saying. To have that hope and conviction, and really believe what she’s saying. She’s reacting and acting out the brain she’s eaten. It’s really more The Fog. But it’s really this person who believes he’s making a difference in the world. Really, these things he’s saying about justice—those cliches are what he really believes.

Hunter: We definitely didn’t have any of those guys all spend a lot of time and money putting those costumes together. We neither have the time, nor the money to do that. But also, that’s not what we were doing: these guys were all very much local vigilante heroes. Not some of these big superhero shows as they first became a superhero, and then it turns into something else. But these guys, it was a bit more cobbled together and that sort of thing. Not as slick as, say, Arrow or The Flash, or something like that. We were able to kind of make it a bit more street, use more found things and kind of cobble it together in a way that was still fun and interesting, but also told the story of who the superheroes, the characters were.

Ruggiero-Wright: One of the things that was tricky about the episode was having [Liv]] speak in that slogan about justice speak. More like a Batman-inspired speech. It was a lot of pressure to have every one of those lines be a snippet; every line was like a logline. I think I watched Batman Begins 30 times while writing that episode, in addition to the 10 times I saw it before. It was definitely something I was really itching to do. I was so psyched we got the chance to do it. Rose did a great job. She knocked it out of the park.

Hunter: The one who had the most street clout was the Fog. He was always gonna be the main one who was most dressed for being able to do action, and he was the most believable as having a bit more of a sophisticated costume than some of those other guys. One of them said at one point that they were a bit more about making mall appearances. So there was a bit of that as well, so they didn’t need to be as protected. None of those guys really had armor bits, whereas the Fog and Liv, both of them had kind of elements of Motorcross and mountain biking armor on there, integrated into the costume so they could have some more protection.

McIver: I was glad it was less revealing than I think superhero costumes can be. More forgiving! I was grateful. I was also grateful I could slip thermal underneath, because it was the middle of winter in Vancouver, so it’s certainly nice to be warm.

Ruggiero-Wright: It was originally called “‘Tis the Season to be Zombie,” but Rob likes the episodes to be more about the brains than zombie. I put every Christmas thing in the world in that episode, and he had to take it back. “

[Christmas] was such a bonus for me, personally. I love the Batman that took place over Christmas—Gotham lends itself to Christmas in a way. I loved the idea of seeing her in our version of a superhero costume, and having that Batman-esque rooftop shot, and in the background see something jolly. Something that had a seasonal flair felt like a great comic book panel. It seems like it would be great fun. It’s funny, because I had pitched Liv on Santa brain—we ended up doing that in a little snippet in the episode after this. A person can delude themselves into thinking they are something they are not. The Fog believing he’s a super hero, a duty beyond what a normal civilian has.