Two months ago, we shared an exclusive info/photo with you without knowing from which press interview it was. We now have more information! To start, here’s a summary of the information we shared with you in March. 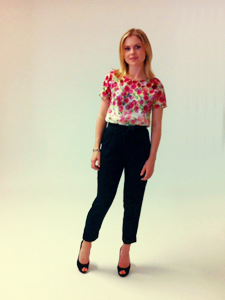 2015, during her return in New-Zealand, Rose McIver made an interview for the NZ press. However, we never had the chance to see the interview or photoshoot. Here’s to you, some great informations shared by Amber Whitecliffe for us.

Rose was stylized by Michiko Hylands from SPY NEWS. Her brother’s wife, the talented Philippa made the makeup. She wears a top of the New Zealand designer Amber Whitecliffe and named ‘Garden Tee’.

This is not the first time that Michiko works with Rose. In fact, during the promotion of ‘The Lovely Bones‘, she often worked with her for her various events (red carpet, interviews…).

We now know that she have been interviewed by Matt Mclean for ONE NEWS. Video interview is available below. 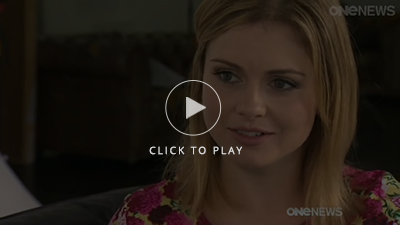 “I’m so proud of what we’ve done, so I think that makes it a lot easier too. I think it’s a show that’s really funny and original”.

The 26-year-old is the star of a brand new US TV series called iZombie.

“It is 13 episodes, one hour drama, with a lot of comedy about me playing a zombie, basically, who is trying to pretend to be human for her family and friends”.

But wait, as they say. There’s more.

“It’s technical…when I eat a brain, I get visions of what happened to that person before they died, and I can help solve their murder.

If it sounds kitschy, it’s meant to.

“It’s pretty subversive, and it has a glint in its eye,” Rose admits. “There’s a real self-awareness about it being a zombie show, and it has a real sense of humour about itself.”

Rose McIver has been working steadily in America for the past five years. After a supporting role in Hollywood film The Lovely Bones kick-started her career, the actress has found success with roles on shows like Once Upon a Time, and Masters of Sex.

But when the TV industry’s pilot season rolled around, Rose McIver was looking for a challenge.

“The problem is, a lot of the pilots that you read are sort of imitations of shows that worked the year before,” she laments. “So you tend to read quite a lot of unoriginal material”.

So, naturally, iZombie leapt off the pages.

“What was so exciting was it’s nothing like anything I’ve read before. It’s a zombie comedy procedural drama”.

iZombie premiered on American network The CW yesterday. 2.3 million people tuned in, and it was a critical success. Entertainment Weekly wrote that it “injects fresh life into the increasingly staid genre of supernatural TV”.

Another review says “Rose McIver has brains, brawn, and beauty”.

She has a successful team working alongside her. iZombie’s showrunner, Rob Thomas, is the man behind cult classic Veronica Mars, which launched Kristen Bell into superstardom.

But Rose McIver is adamant, this won’t change her. Or at least, she promises not to lose her New Zealand accent.

“Yeah, no,” she says, in that way only Kiwis can. “When I come back home…everybody says it gets stronger. Or when I talk to someone on the phone from New Zealand, I say ‘aye?!'”