Check out the video below of this episode alongside high quality screen-captures who have been added in the gallery. 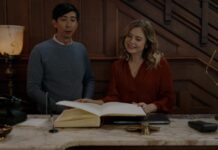