The cast of the upcoming Disney Channel Original Movie  ‘Johnny Kapahala: Back on Board‘ spent the day at Disneyland Resort in Anaheim, California on Saturday 17.

They were photographed to promote the movie in the following attractions: ‘Matterhorn Bobsleds‘, ‘Alice in Wonderland‘, ‘Mad Tea Party‘ but also in front of the famous & beautiful ‘Sleeping Beauty Castle‘.

Today, I am delighted to share with you +04 HQ exclusives photos of their little trip to Disneyland! 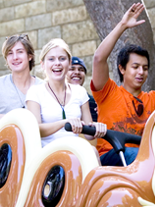 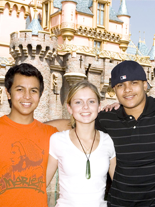 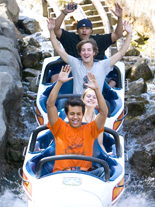 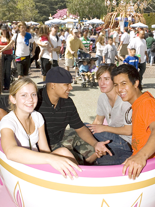 ‘JOHNNY KAPAHALA: BACK ON BOARD’ Synopsis: In the movie, Johnny Kapahala, a teen snowboarding champion from Vermont, returns to Oahu, Hawaii, for the wedding of his hero — his grandfather, local surf legend Johnny Tsunami — and to catch a few famous Kauai waves. When Johnny arrives, he meets his new family including “Uncle Chris” (the 12-year-old son of his new step-grandmother) who resents the upcoming marriage. Chris’s only interest is to join a mountain boarding crew led by a teenage bully. When Johnny’s grandfather and his new wife open a surf shop that also caters to mountain boarders, they are soon embroiled in a turf war with a rival shop owner who wants to shut their business down. Chris’s antics cause complications for the store opening and the wedding, but eventually he reaches out to Johnny who helps Chris find his place within the new family and settle a turf war between the dueling sports shops.

For more informations about the movie, be sure to check out our filmography guide.