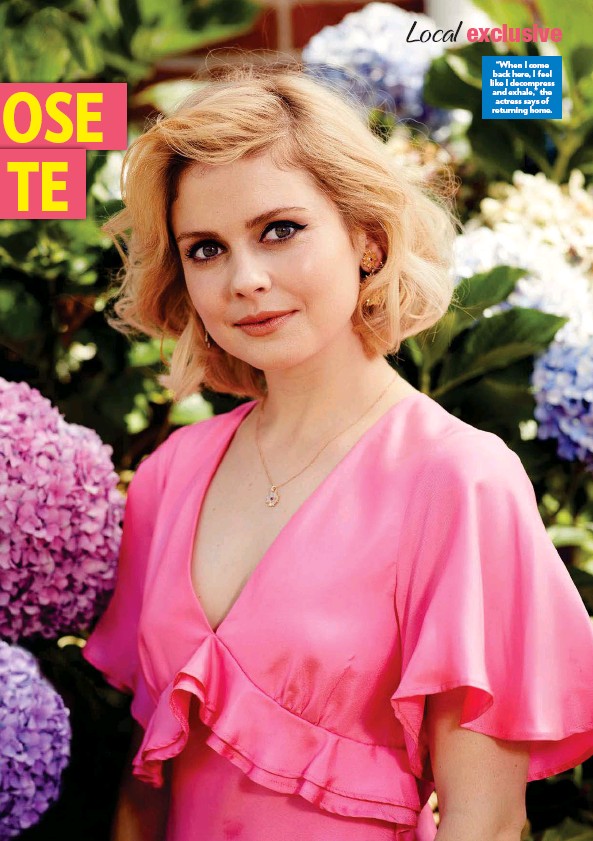 Rose has been featured in ‘Woman’s Day Magazine NZ‘ from April 1, 2019 Issue. 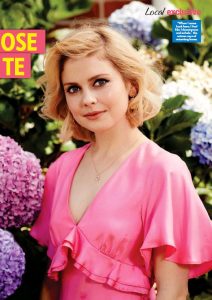 “When I come back here, I feel like I decompress and exhale,” the actress says of returning home.

She’s one of our top acting exports and now Rose McIver is surprising Kiwi audiences with the revelation she can sing too! In the new musical drama ‘Daffodils‘, the ‘iZombie‘ and ‘The Lovely Bones‘ actress belts out gorgeous covers of local classics by bands such as Crowded House and the Exponents in a soul-stirring voice worthy of a recording contract.

But what is perhaps even more surprising is the fact Rose once fancied herself a rapper!

“Oh, yeah, I had some very questionable rapping days,” the Los Angeles-based Aucklander, 30, tells Woman’s Day, giggling as she recalls how her dreams of hip-hop stardom died in her awkward preteen years.

“I recorded 2Pac’s ‘Changes’ into my tinny old computer microphone, and I remember a couple of my friends heard it and just teased me endlessly. That’s when I realised it wasn’t my true calling.”

Sadly for Rose – who still listens to rappers Drake and Frank Ocean – it’s not the only musical disaster of her youth. She also recalls a “really terrible” performance of Bic Runga’s “Sway” at her Glen Eden Intermediate School talent quest.

Fortunately, in bittersweet love story ‘Daffodils‘, she gets to redeem herself with a touching version of the singer’s hit “Drive”.

“That was the scariest but also my favourite song to perform because I’m such a huge fan,” Rose says. “I’m so nervous for her to hear it as it’s never going to be like Bic’s version, but it’s such an honour to sing a song by somebody you grew up with and love.”

Another Kiwi artist Rose admires is “Somebody That I Used to Know” singer Kimbra, who just happens to play her daughter in ‘Daffodils‘.

“What can’t that girl do?!” the actress marvels. “She’s such a multitalented person, it didn’t come as a grand shock to me that she could act. Unfortunately, we only shot one scene together, but we did stay in the same house while we were filming, so it was great to build a bit of a relationship.”

It’s not every day you end up flatting with a Grammy winner, but Rose laughs that their time living together was hardly rock ’n’ roll. “We were actually both sick that week, so we were existing on lemon teas and hot noodle soups. It wasn’t the party atmosphere you might imagine!”

Also in the film is Invercargillborn actor George Mason, who quit ‘Home and Away’ after four years of playing Summer Bay bad boy Ash to star as Rose’s on-screen husband in ‘Daffodils‘.

The pair met while filming TV movie ‘Tangiwai: ALove Story‘ in 2010 and Rose says, “He’s just brilliant. We both left New Zealand for work and this just seemed like the perfect thing to return home for.”

Rose grew up in Titirangi, West Auckland, where her ceramicist mother and photographer father still live. In her words, “Mum and Dad live on a cliff by the beach and they’ve got chickens, which is just a ludicrous existence. It’s a disaster waiting to happen.”

She starred in her first short film at just 18 months old and made a brief appearance as a toddler wearing angel wings in ‘The Piano‘ at age three, which led to stints on ‘Shortland Street‘ and ‘Hercules‘, then the lead role in children’s fantasy series ‘Maddigan’s Quest‘.

Rose tells, “My parents have always been supportive about me pursuing an artistic career, but they were also adamant that they wanted me to stay in school – it was never a full-time job for me when I was young.”

The actress credits attending a public high school, rather than being home-schooled like so many child stars, as the reason she’s never gone off the rails.

“It’s given me real life experience to draw from and taught me valuable social skills,” she says. “Otherwise, there are all sorts of problems that can happen from having no understanding of people your own age. It’s very difficult for a child to manage a fulltime career, get an education and learn to socialise. I see more examples of it not working, than working.”

Since shooting to global fame after starring alongside Susan Sarandon and Mark Wahlberg in Sir Peter Jackson’s ‘The Lovely Bones‘, Rose has spent eight years based in the States. She’s just finished filming the fifth and final season of cult comic series ‘iZombie‘ , and her next gig is a second sequel to surprise Netflix hit ‘A Christmas Prince‘.

However, Rose hopes work will bring her back to Aotearoa very soon.

“It was just heaven filming in Wellington over summer,” she sighs. “It was paradise – so picturesque with sparkling blue waters, clear sky and really laidback people. I need to come back in August so I remember what it’s like in winter!“

“It wasn’t long enough. I absolutely want to come back and live in New Zealand. I will spend more time there in the coming years.”