I share with you today exclusively the scans of the magazine ‘Fashion Quarterly‘ published yesterday (Ferbuary 25, 2019) in New Zealand where Rose is appearing in. Below, you can find high quality scans from the magazine + interview transcript, photoshoot outtake + video interview.

For the moment, we only have one photo from this session. 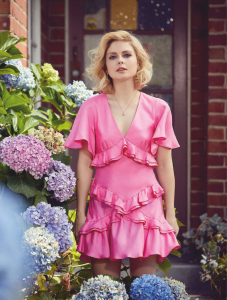 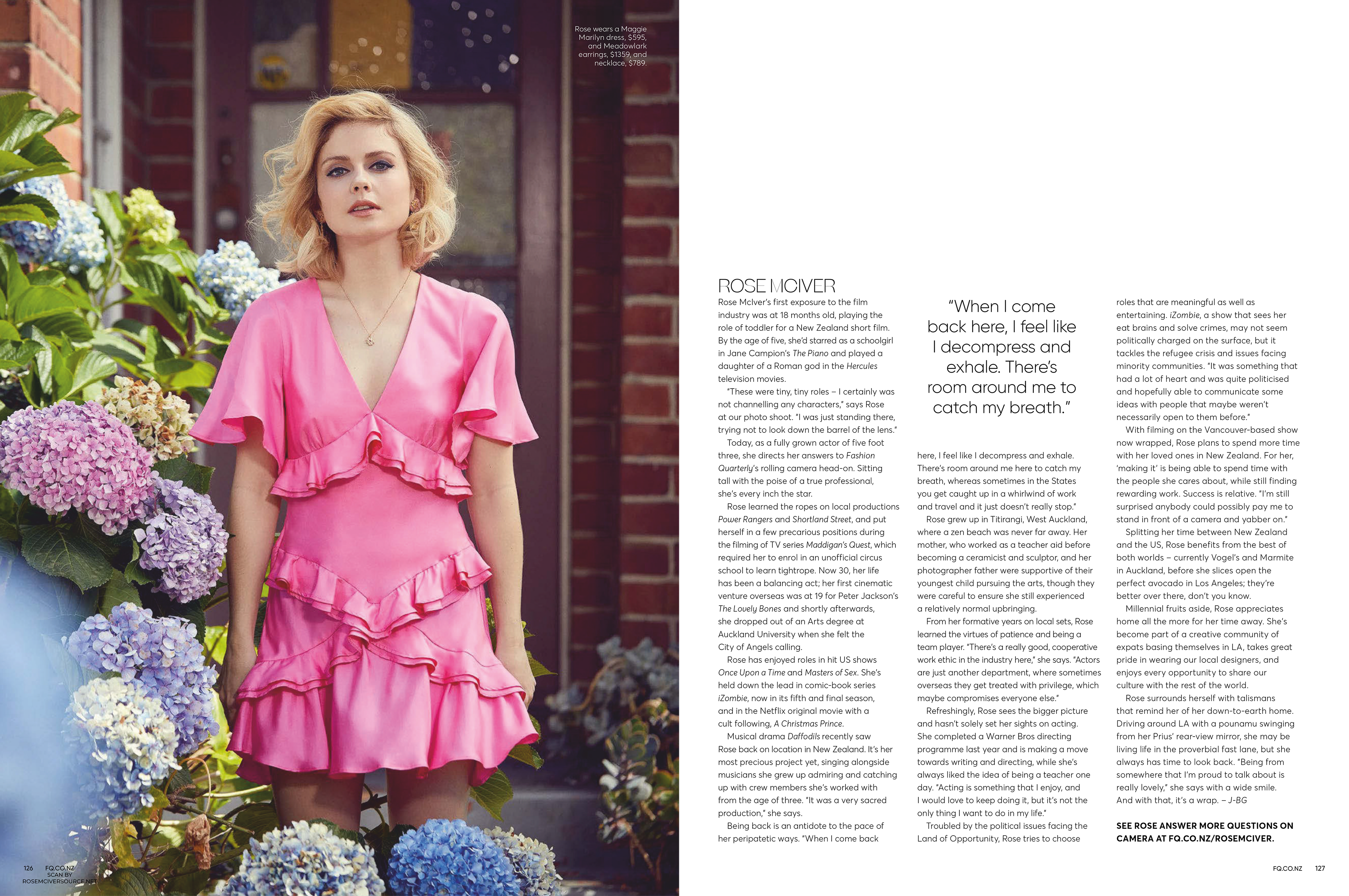 Rose also has answered a few questions from her fans during this interview. Check out the video below to see the questions and answers.

Interview screencaptures are available in the gallery (click here)

Source | Rose McIver’s first exposure to the film industry was at 18 months old, playing the role of toddler for a New Zealand short film. By the age of five, she’d starred as a schoolgirl in Jane Campion’s ‘The Piano‘ and played a daughter of a Roman god in the Hercules television movies.
“These were tiny, tiny roles – I certainly was not channelling any characters,” says Rose at our photo shoot. “I was just standing there, trying not to look down the barrel of the lens.” Today, as a fully grown actor of five foot three, she directs her answers to Fashion Quarterly’s rolling camera head-on. Sitting tall with the poise of a true professional, she’s every inch the star.
Rose learned the ropes on local productions ‘Power Rangers‘ and ‘Shortland Street‘, and put herself in a few precarious positions during the filming of TV series ‘Maddigan’s Quest‘, which required her to enrol in an unofficial circus school to learn tightrope. Now 30, her life has been a balancing act; her first cinematic venture overseas was at 19 for Peter Jackson’s ‘The Lovely Bones‘ and shortly afterwards, she dropped out of an Arts degree at Auckland University when she felt the City of Angels calling.
Rose has enjoyed roles in hit US shows ‘Once Upon a Time‘ and ‘Masters of Sex‘. She’s held down the lead in comic-book series ‘iZombie‘, now in its fifth and final season, and in the Netflix original movie with a cult following, ‘A Christmas Prince‘.
Musical drama ‘Daffodils‘ recently saw Rose back on location in New Zealand. It’s her most precious project yet, singing alongside musicians she grew up admiring and catching up with crew members she’s worked with from the age of three. “It was a very sacred production,” she says.
Being back is an antidote to the pace of her peripatetic ways. “When I come back here, I feel like I decompress and exhale. There’s room around me here to catch my breath, whereas sometimes in the States you get caught up in a whirlwind of work and travel and it just doesn’t really stop.”
Rose grew up in Titirangi, West Auckland, where a zen beach was never far away. Her mother, who worked as a teacher aid before becoming a ceramicist and sculptor, and her photographer father were supportive of their youngest child pursuing the arts, though they were careful to ensure she still experienced a relatively normal upbringing.
From her formative years on local sets, Rose learned the virtues of patience and being a team player. “There’s a really good, cooperative work ethic in the industry here,” she says. “Actors are just another department, where sometimes overseas they get treated with privilege, which maybe compromises everyone else.”
Refreshingly, Rose sees the bigger picture and hasn’t solely set her sights on acting. She completed a Warner Bros directing programme last year and is making a move towards writing and directing, while she’s always liked the idea of being a teacher one day. “Acting is something that I enjoy, and I would love to keep doing it, but it’s not the only thing I want to do in my life.”
Troubled by the political issues facing the Land of Opportunity, Rose tries to choose roles that are meaningful as well as entertaining. ‘iZombie‘, a show that sees her eat brains and solve crimes, may not seem politically charged on the surface, but it tackles the refugee crisis and issues facing minority communities. “It was something that had a lot of heart and was quite politicised and hopefully able to communicate some ideas with people that maybe weren’t necessarily open to them before.”
With filming on the Vancouver-based show now wrapped, Rose plans to spend more time with her loved ones in New Zealand. For her, ‘making it’ is being able to spend time with the people she cares about, while still finding rewarding work. Success is relative. “I’m still surprised anybody could possibly pay me to stand in front of a camera and yabber on.”
Splitting her time between New Zealand and the US, Rose benefits from the best of both worlds – currently Vogel’s and Marmite in Auckland, before she slices open the perfect avocado in Los Angeles; they’re better over there, don’t you know.
Millennial fruits aside, Rose appreciates home all the more for her time away. She’s become part of a creative community of expats basing themselves in LA, takes great pride in wearing our local designers, and enjoys every opportunity to share our culture with the rest of the world.
Rose surrounds herself with talismans that remind her of her down-to-earth home. Driving around LA with a pounamu swinging from her Prius’ rear-view mirror, she may be living life in the proverbial fast lane, but she always has time to look back. “Being from somewhere that I’m proud to talk about is really lovely,” she says with a wide smile.