The zombies are coming! Or at least, the pseudo-zombies. On Thursday The CW officially announced that it will be transforming the comic book series iZombie into a TV show, set to premiere at midseason. And now DC Collectibles, the merchandising wing of DC Entertainment, whose Vertigo imprint published the series, is revealing an upcoming statue of the comic’s main character, in all her brain-eating glory.

Based on the designs of the comic-series’ artist Michael Allred, and sculpted by Phil Ramirez, the statue is approximately 9.25 inches tall and will go on sale this November for $99.95.

Though the TV series will make some tweaks to the original story (written by Chris Roberson), the main plot is essentially the same: Following a zombie infection, a young woman must eat the brains of dead people in order to maintain her own humanity. As a result, she absorbs the memories of the dead person and, somewhat reluctantly, helps solve their murder or carry out their final wishes. The CW has cast Kiwi native Rose McIver as Liv Moore, who fittingly works in the coroners’ office. In the original comic the protagonist was Gwen Dylan, a gravedigger. In both cases, the nature of her “life” results in a Goth look of pale skin and white hair. 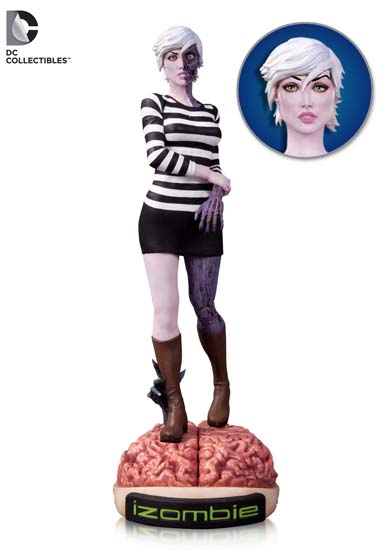