Rose‘s newest TV comedy ‘Ghosts‘ premiered two weeks ago and since then, she’s doing a few interview to promote this show. For all information about this series, check out the tag or the special page.

Source | LOS ANGELES — The title seems to be a dead giveaway, but there’s more to the new comedy “Ghosts” than things that go bump in the night.

“We totally think of this show as ‘What We Do in the Shadows’ meets ‘Ted Lasso,” said producer Joe Wiseman.

Substitute misfit spirits for predatory vampires, and a lovable young couple for upbeat Ted, and you’ll get an inkling of what Wiseman and collaborator Joe Port have in mind for the CBS sitcom. It airs 9 p.m. EDT Thursday and streams on Paramount+.

“Ghosts” stars Rose McIver and Utkarsh Ambudkar as Samantha and Jay. She’s a freelance journalist, he’s a chef on the rise, and they’re living the big-city life. Then she inherits a mansion in New York’s Hudson Valley and, on a whim, enlists a reluctant Jay into renovating it as a bed-and-breakfast.

Turns out, however, it’s already inhabited by deadbeat guests with deep emotional ties to the property — they died there —and who are spooked by the idea of sharing their digs with the living.

A near-fatal accident gives Samantha the ability to see and interact with the departed, who are far more quirky than threatening. The series, based on the lauded BBC series of the same name, films in Montreal as a stand-in for New York.

“When I read the pilot script, it was one of the first times in a long time I had just laughed out loud. And I love working in comedy TV,” McIver said.

She’s unsure why “interacting with the afterlife has been a very big part of my career,” as she put it, with “iZombie” and “The Lovely Bones” among her TV and movie credits. “I don’t particularly seek it out. I don’t know if it’s something in my complexion,” the actor said, drolly.

Ambudkar, who described himself as reluctant to join the series for reasons including the pandemic constraints that delayed its production, credits his co-star’s urging with helping to change his mind.

“Rose kept calling and texting, like, ‘Dude, what are you doing? We’ve got to do this show together.’ She was very persistent,” said Ambudkar (“Blindspotting,” “Never Have I Ever”).

The project’s clever premise, what he termed a new take on the “dysfunctional family comedy,” and its alternate approach to the three-camera sitcom format with a laugh track, eased his concerns about joining a traditional network series.

“I watched five minutes of the BBC show, and I saw the single-camera format,” Ambudkar recalled. “I saw the level of sort of humor that was being employed, and I said, ’This could really work, no matter where it goes.’ Sometimes you just have to trust in the product itself, not where it lands.”

“We call him a comedic weapon,” McIver said. Drawing on his improv experience, “Utkarsh always brings something surprising. We have developed a really good relationship of working out where our strengths are and playing off each other.”

“Rose is really dedicated to her craft” and to her castmates, Ambudkar said. “She does all her off-camera work at the same energy level as her on-camera. … It’s really nice when your No. 1 is that present and invested in everyone’s success.”

McIver said the prospect of getting to work on the series was “a beacon” that helped her weather the COVID-19 pandemic. “And in turn, we hope it brings the audience joy after what’s been such a brutal year,” she said.

The buoyant, Emmy-darling “Ted Lasso” on Apple TV+ is seen as that kind of antidote, with the further cachet of being part of a streaming universe that has rapidly growing appeal for the TV industry and viewers.

But producers Port and Wiseman push back against the idea that networks can’t field series equal to those online — while also noting that “Ghosts” has a foot in both worlds, thanks to CBS sibling Paramount+.

It wasn’t so long ago that broadcast comedies were being showered with awards, Port said. ABC’s “Modern Family” nabbed its fifth consecutive best comedy series Emmy in 2014, with cable and streaming entries dominating since then.

Besides, “the line between what is streaming and what is broadcast is a little blurred,” Port said. “Ted Lasso,” for example, “isn’t the edgiest show. It’s a feel-good show and something that, apart from a couple parts here and there, could easily be a broadcast show.”

The Apple TV+ comedy is a “traditional, well-done, single-camera sitcom,” he said — a description that sounds hauntingly like “Ghosts.” 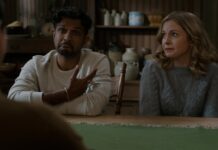