After releasing the first ‘iZombie‘ Funko Pop! at the San Diego Comic-Con this summer; today we learn that a new and EXCLUSIVE Funko Pop! of ‘iZombie’ will be released at the Comic Con in New York. This time, it will be a version of ‘Liv Moore‘ on Full-on Zombie Mode. 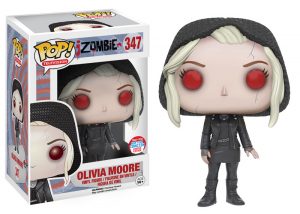 Source: funko.com | Funko is proud to announce the latest batch of New York Comic Con 2016 exclusives! Our exclusives contain many of Funko’s most popular lines like Pop!, Dorbz, and ReAction! Their goal was to cover as many beloved licenses and characters as possible to remind every Comic Con attendee why they fell in love with these stories in the first place!

Today’s announcement includes a couple great TV additions, like Hawkgirl and Zombie Olivia Moore, as well as new versions of old favorites, like Batman, Batgirl, and The Joker!