So as soon as Rose McIver was announced for Oz Comic Con, you couldn’t wipe the smile off my face. That meant we had Liv Moore AND Blaine DeBeers! Holy skull busters! And as if that wasn’t exciting enough, iZombie duo photo ops were announced. The Zombie Gods were surely smiling down upon us.

So as the time was drawing closer to the big day, I was thinking about the photo op and excitedly talking to people about it when the subject of New Hope, New New Hope and New New New Hope came up, which of course lead to the vicious, scabby zombie rat in episode 14 of season 2.  Light Bulb Moment.  The search for a plushie white rat began….and ended at IKEA, because rats are the obvious choice for plushie toys for kids. Who knew?! Several sharpies and an artistic, great friend later and psycho zombie rat was born. I call her New Hopeless. 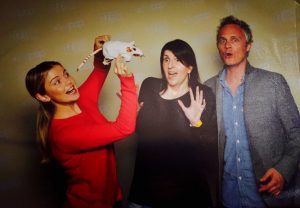 Finally the big day arrives, and I am so freaking excited. New Hopeless and I were almost at the front of the queue, and I suddenly thought, what the hell are we going to do in the photo? What pose should we ask for? Panic ensues.

So I get behind the curtain and see Rose and David for the first time and my mind kind of blanks out for a minute, because Rose McIver is so unbelievably gorgeous it literally stunned me. Like OMG her skin is radiant. This woman glows. Who knew zombie makeup was so good for the complexion!

Before I knew it, it was my turn and they both turn to look at me and then….Rose McIver freaking screams, like for real, she screamed AND giggled and said, “OMG look at the rat.” And then she grabbed New Hopeless out of my hand, and I said, “So I’ve got the psycho zombie rat but I dunno what…” (trying to lamely ask about what we could do for the photo.) Meanwhile they both automatically assume ‘attack rat/omg ahhhhh’ poses like they’re just so tuned into each other, which upon reflection is so damn cute. And I’m like, “oh, okay then.” (I was obviously still in stunned mode!) So I just joined in with the ‘omg ahhhhh’ thing. And the photographer snapped immediately, but David mustn’t have thought he was quite in character enough, and he asked the photographer if he was sufficiently ‘omg ahhhhh’ and she checked and said, “yeah, you’re good.” And they both cracked up and thanked me, and of course I thanked them. And sadly it was all over far too quickly. In case you’re wondering, I remained stunned and in a kind of blur for several minutes afterwards, because WOW!

But OMG it was such a great experience. Rose was the sweetest, cutest, loveliest most beautiful person. And she’s tiny but so very, very fun and genuine. And David is really gorgeous and is rocking the zombie hair but with heavy black roots which was really sexy, I have to say. Even friends I was with who are not into the show (I KNOW OKAY BUT I’VE TRIED – IT’S THEIR LOSS) saw him at the autograph tables and commented how hot he looked.

Basically it was the most fun I’ve had in a photo op, and it most definitely turned out the very best of all my photo ops I’ve ever had.

Big thanks to Melisa for sharing her story with us!