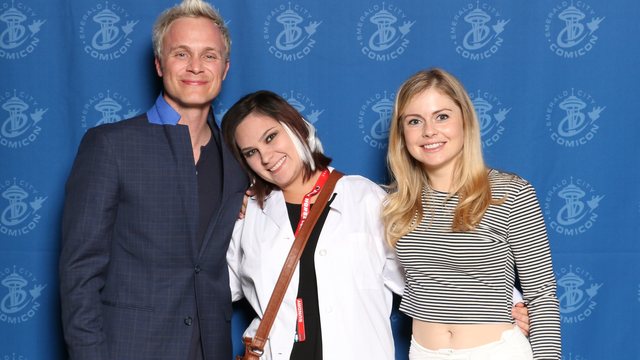 I got to Emerald City Comic Con in Seattle early on Friday and there was literally no one else in his line (Norman Reedus and Jon Bernthal and Nathan Fillion were getting all the attention). So my best friend was talking to me because I was about to hyperventilate. I finally get the courage to go up to him. I had to go through the volunteers first, give them the money and pick what picture I wanted him to sign. When I moved in front of David, I thought he was texting so I waited but then he held up his phone and took a picture of me since I was dressed as Liv. So….yes, David Anders has a picture of me on his phone.

So I think I babbled for a few seconds cause I waited for this moment for at least 7 months. I told him all the shows I love him in and we ended up laughing at “Blaine” basically being in OUAT to deliver Zelena’s baby lol. Then I told him how hard I ship Blaine and Liv and referred to his tweet (All about that Bliv) and then he said he shipped Pavi too and I fangirled hard for a moment because OMG ME TOO.

Then I told him I came to Emerald City Comic Con just to see him and then he said “Aww, it’s so nice to meet you, darlin’“ (he ends up calling me this a lot) and then he leaned over the table and hugged me. And wowwww. I mean, I have no other way to describe it. He was smiling that huge gorgeous smile of his the whole time and then he just..hugs me …and ….WOW.

So I went back to my friend who was talking with one of the volunteers and I just burst into tears from overwhelming happiness. Hahaha so they were trying to calm me down.

Then Sunday happens. I get in line to meet Rose McIver (her line is super short too) and she is just the cutest little thing ever. She told me, “I love your outfit! You’re turning!!” My Liv cosplay only had streaks of white hair. So I talked to her for a few seconds and then told her I’d see her for our photo op with David in a few minutes.

So…photo op time! As soon as it’s my turn, David and Rose recognize me and they both say “Hello again!” AAnd I can’t even help myself. I throw my arms around David and just hug him so hard because I wanted to feel what it felt like to hold him without a table between us. (I’m tearing up just thinking about this) He hugged me back and said “Hi, darling” in my ear and then I turned to Rose and she said “What a great hug, I want one too now!” So she hugged me and it was so great. I stood in the middle of the two and we all had our arms around each other and I laid my head on David’s shoulder when the picture was taken. When I got the picture back, David has this shit eating grin on his face and it makes me laugh.

THEN I get back in line for Rose when I know the photo op is about done. David wasn’t supposed to come back to his booth until later, but then he ended up showing back before Rose (and again, there was no one in his line, I don’t know why he didn’t have a lot of people all weekend for). So I slipped over to his booth (he was right next to Rose) and showed him the photo op picture for him to sign. Then he ended up signing on Rose instead of himself and said “I’m signing on Rose and she’s signing on me.” I’m like lol okay, and then I just told him how great it was to meet him and that I traveled all the way from Texas to Seattle just to see him and he made my weekend perfect. And thanked me and called me darling a few more times lol and then I told him to have a safe trip home.

Then I moved back over to Rose’s line and when I gave her the photo op picture to sign and she looked so confused (I noticed everyone else’s photo op pictures she signed on herself). So I told her what David said and she pushed their curtain aside and told him, “You look different in this picture. You grow your hair out?” And then he saw my photo op Rose was showing him and he mocked her cute accent about changing his looks. So I have the only photo op picture where David and Rose signed on the others’ bodies hahaha. So I got to see (and be in the middle of) their cute exchange. Then I told her that I shipped Blaine and Liv and she looked surprised but really happy lol. I did not tell them about Contagious (my Bliv fanfiction) though. I wish I had more time.

Big thanks to Sarah for sharing her story!