Brampton’s Own finally have a release date! 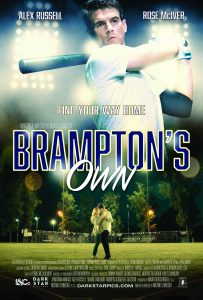 Variety learned exclusively that Dark Star Pictures has acquired rights to the romantic drama, ‘Brampton’s Own‘.

The baseball-centric romance, written and directed by Michael Doneger, will also be made available on digital platforms and through local cable providers on Oct. 19 (such as iTunes, Amazon, Google Play, Xbox, Fandango Now, Direct TV, Dish Network).

Russell portrays a retired minor league baseball player who has returned to his small hometown where he was once a celebrated athlete and finds his old friends have started families, his ex-girlfriend is now engaged, and his mom is selling his childhood home and moving in with her new boyfriend.

The film was produced by Doneger’s Cloverhill Pictures, Mark DiCristofaro in association with his company Perspective Productions, and co-produced by Matthew Harper. The film had its world premiere at the Nashville Film Festival.